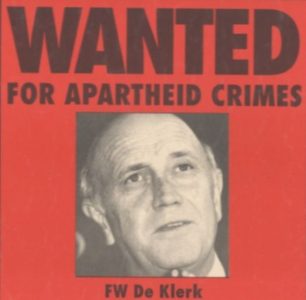 The families of the victims of Apartheid have been left angered and disappointed amid the passing of apartheid-era President FW de Klerk.

In his final message, de Klerk claimed that he has had a change of heart as he believes that apartheid was wrong.

But anti-apartheid activists who were tortured and the families of those killed at the hands of de Klerk’s death squads have dismissed his words with a pinch of salt. They say he has blood on his hands and now has taken apartheid’s secrets to the grave.