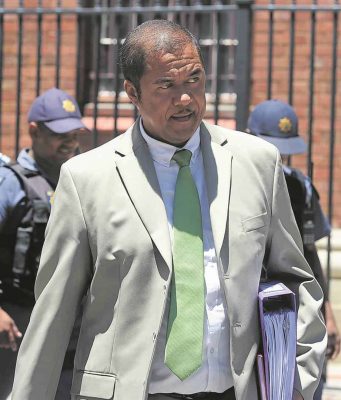 The former rugby player is accused of murdering top Anti-Gang Unit detective Charl Kinnear. He is also charged with conspiring to murder and the unlawful interception of communication.

Killian’s attorney Eckhard Rosemann says he has a document that can prove his client was a registered PI with the Private Security Industry Regulatory Authority (PSirRA). However, the regulatory authority says it has no records of Killian being registered with them.

Meanwhile, three days have been set aside for murder accused Zain Killian’s bail application, as fears mount for his safety at the Bishop Lavis Magistrate’s Court.

Killian is accused of the murder, conspiracy to commit murder, and the unlawful interception of communication of top Anti-Gang Unit detective Charl Kinnear.  He was shot and killed outside his Bishop Lavis home last month. The matter has since been referred to the Bellville Magistrate’s Court to start the bail application on from the 26th – 30th October. National Prosecuting Authority (NPA) spokesperson in the Western Cape Eric Ntabazalila says all parties agreed that the matter needed to be moved from the Bishop Lavis Court. Ntabazalila adds that the NPA has been tasked with organising an alternative venue.