Kramat of Sheikh Hassen Ghaibie in line for heritage status 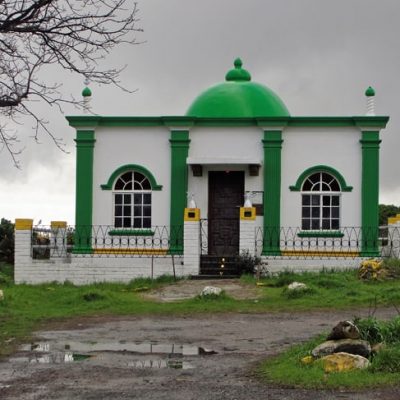 The burial place of Sheikh Mohamed Hassen Ghaibie Shah al-Qadri has been nominated for Heritage Status. The declaration would provide the site protection and preservation.
Nominated by the Cape Mazaar Society and Vidamemoria Heritage Consultants, the declaration is being sought for the ‘Circle of Tombs.
A Kramat is the burial place or shrine of an Islamic saint. The Sheikh Ghaibie Shah Kramat is found on Signal Hill and forms part of what is known as the Circle of Kramats. This Circle of Kramats is a shrine to Muslim holy men buried in Cape Town. Their positions in and around Cape Town are said to fulfil a 250 – year old prophecy foretelling a ‘Circle of Islam’ around the Mother City.
Others buried at the Signal Hill site are Tuan Nur Ghiri Bawa (also known as Tuan Galieb), Tuan Sayed Sulaiman and Tuan Sayed Osman.

During the colonial era (1652–1910) a number of respected Muslims were buried in the hills and mountains surrounding the city of Cape Town, or near other settlements. Muslim slaves visited these areas to fetch water, collect firewood or forage for food. They were said to conduct forbidden prayers and ceremonies. Many of these grave sites were in well-hidden areas but marked with stones or cloth, an unusual practice that indicated that the buried person was considered important. From the early 20th century, Muslims began marking the sites more visibly, with tombs and buildings

Although little oral history has survived about most of the men who are buried there, many have been identified as early political exiles, freed slaves and Imams who were highly regarded.