France is curbing freedom in the name of freedom 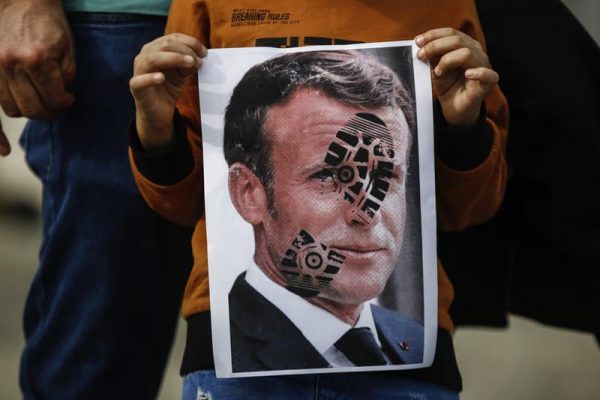 France under President Emmanuel Macron has been making more than a few international waves over the past few months. It has involved itself in the dispute between Greece and Turkey in the Eastern Mediterranean, for example, and given tacit support to the rogue Libyan Field Marshal Khalifa Haftar against the government backed by the UN and, among others, Turkey. No surprise, therefore, that Turkish President Recep Tayyeb Erdogan was moved to suggest that Macron should get his head examined — I’m paraphrasing — after his French counterpart’s response to the murder of a teacher in France by a lone Chechen Muslim.

The connection between all of these incidents is Macron’s attempt to take the far-right electoral ground with a strong stance against political Islam. The rising Muslim-majority power that Turkey and its devout but pragmatic leader Erdogan represent are unacceptable to the French leader.

Other European and Western leaders over almost two decades of the global war on terror have always managed to target politically Islamic individuals, entities and ideologies without mentioning the religion itself. Macron has broken that trend. “Islam is a religion that is in crisis all over the world today,” he said last month, “we are not just seeing this in our country.” In doing so, he opted to target the faith of roughly a fifth of the global population.

This has led him to crack down on France’s six million Muslim citizens. A draft law has been issued restricting home-schooling due to “indoctrination”, while mosque imams will have to be state-approved and not come from abroad. Dozens of mosques have been closed along with private Islamic schools and even Muslim-owned businesses and cafes.

One of the Muslim organisations that have been targeted is Barakacity, the largest Muslim NGO in France which reportedly provides humanitarian aid to millions worldwide. In the early hours of 14 October, the charity’s founder and head, Idriss Sihamedi, had his home raided by police; he was physically assaulted and his wife and child were not allowed to get dressed.

Sihamedi told Middle East Monitor that the police who raided his home and office were a special anti-terrorism unit dealing with threats to national security. He believed that deploying this particular unit was a warning for him to stop talking about Macron’s targeting of the Muslim community. “[They were sent] to show their power to the French people, to send a message to all humanitarian organisations that ‘If you have any suggestion, we can kill you, we can send you the police, we can use our force against you’.”

The government’s case against Sihamedi began when he criticised and “asked questions” of the Moroccan-French journalist Zineb El-Rhazoui, a popular critic of Islam who worked for the infamous Charlie Hebdo magazine. Both El-Rhazoi and the authorities described Sihamedi’s questions on Twitter as “harassment” and defamatory, leading to the raid on his family home, his arrest and his detention twice within a week.

Although the police questioned him on the alleged harassment during the raid, the authorities told him last Wednesday that they are attempting to shut down Barakacity, giving him just five days to object. In a three-page document, the government also deemed him guilty of not speaking positively about Israel, not talking against Saudi Arabia, and of having links to Turkish scholars and imams. He was also accused of having visited Daesh-held territory in Syria back in 2018. Sihamedi denied the charges and accusations, calling them “fake” and “false”.

Pressure on his organisation began in 2013 when a bank holding Sihamedi’s account asked him if the charity’s donors were Islamists. A year later, two banks closed the charity’s accounts and refused to give any reason when asked why.

The government now appears to have run out of patience and is targeting Barakacity. “A lot of Muslims in France donate to Barakacity… which aids poor people in Africa, in Burma for the Rohingya people, and in Gaza also,” explained Sihamedi. “So the French government doesn’t like that.”

Many have attributed Macron’s recent stance against the French Muslim community as structural Islamophobia intended to help him win the next election by attracting votes from the far-right which leans towards his rival Marine Le Pen. While he believes this to be an accurate assessment, Sihamedi also thinks that the issue is much deeper, with prejudice ingrained deeply across French society and culture. “Before every election we have the same game… it’s against Islam. Now, we have Macron, but it’s all political [figures]… No one says about the Muslim community that ‘we must respect them’.”

With its state-imposed militant secularism to which France gave birth centuries ago, the country stands in stark comparison to Britain when it comes to their respective Muslim communities. French Muslims are amazed at the prosperous and well-established British Muslims across the channel; many have moved to Britain due to the difficulties of living in France, following a trail blazed by persecuted Protestant Huguenots in the late 17th and early 18th centuries.

According to Sihamedi, the situation of French Muslims is going to become even more difficult. “Absolutely, it will become harder,” especially with regards to the cycle of repression that inevitably every extremist attack. “They will make a cartoon again, but these young people, we cannot control them.”

In its effort to uphold its cherished laïcité, France is crushing the legitimate rights of its Muslim citizens, and they are ever more marginalised. This has put it on a par with authoritarian regimes such as those in Syria, Egypt and the Gulf states, which treat any freedom of speech as an existential threat. It’s not normal, insists Sihamedi. “The Muslims can think, can believe, can talk… There is no link with the terrorist act. If you don’t think like them [the majority community], you will have a problem. In France, we have that problem.”

France is thus curbing freedom in the name of freedom. It is truly bizarre, but the irony appears to be lost on Emmanuel Macron in his rush to boost his election chances. The fact that he is trampling six million French citizens into the ground in the process apparently means nothing to him.

Muhammad Hussein is an International Politics graduate and political analyst on Middle Eastern affairs, primarily focusing on the regions of the Gulf, Iran, Syria and Turkey, as well as their relation to Western foreign policy.

The views expressed in this article belong to the author and not necessarily that of Radio 786. The article first appeared on Middle East Monitor.