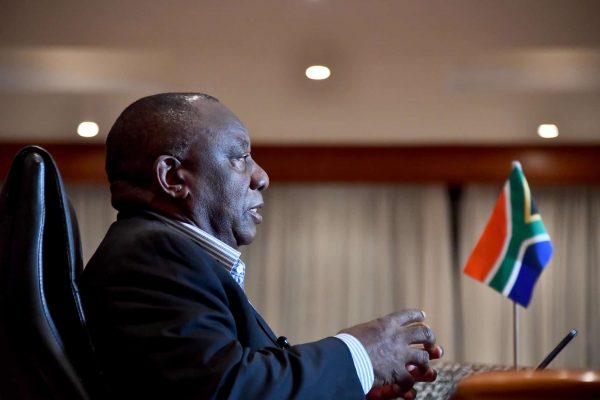 President Cyril Ramaphosa has signalled his strongest indication yet that he will not become a one-term President. He shuffled the Executive on Thursday evening after increasing pressure for him to sack the now disgraced former Minister of Health, Dr Zweli Mkhize.

The cabinet has also had several glaring vacancies with key posts such as Health and the Presidency needing stability.

While pressure mounted this week for him to act, it does appear that the President had been giving the issue some thought, given the rather bold moves he made to consolidate power by placing State Security inside the Presidency. The SSA Ministry has been dogged by corruption, factionalism, and alleged criminal behaviour.

A high-level panel led by former spook; Sydney Mufamadi laid bare the problems at the SSA which Minister Ayanda Dlodlo has been ineffective at reforming. It is no surprise that she was moved sideways but not completely out of the picture, given her influence and ability to deliver a vote for Ramaphosa in the Eastern Cape.

This, strengthened the hand of the president to incorporate the SSA into the Presidency, making it directly subordinate to the president.

Perhaps, what broke the camels back was the claimed insurrection which caught the security cluster napping and exposed it for being woefully incompetent.

Amongst others, it led to the sacking of Nosiviwe Mapisa-Nckaqula as Minister of Defense, now to be replaced by the respected Thandi Modise. Bheki Cele was spared, in a move that isn’t entirely surprising, given that Cele, alongside others like Nathi Mthetwa, Senzo Mchunu and Zweli Mkhize are key actors in Kwazulu Natal, a province that seems less enthused by Mr Thuma Mina himself.

Mkhize’s exit was evidently managed even though speculation is rife that he may well have been pushed before he could jump.

South Africans can however take comfort in the institutional knowledge that comes with Joe Paahla, the newly appointed Minster of Health. His first order of business would be to hold steady the Department of Health to enable it to deliver a capable and competent response to the management of the spread of the coronavirus.

Phaahla served as the deputy minister up until now and filling his shoes is a rather polarizing political figure, Dr Sibongiseni Dhlomo. He served as the Chairperson of Parliament’s portfolio committee on Health, only after he was accused of leading the near collapse of KZN’s Health Department. Only time will tell if he would be of any value to this crucial department – not only to temper the coronavirus outbreak, but to roll out the National Health Insurance Scheme, one of South Africa’s biggest projects in a post-Apartheid era.

The rather lukewarm reaction to the removal of Tito Mboweni signals the fact that the former Reserve Bank governor doesn’t have much of a political constituency. In fact, he has increasingly become a political liability for the president in his stubborn efforts to bring public finances in-line with conservative neo-liberal practices – the type of approach that put him on a warpath with unions, the SACP and even some within the ANC.

Mboweni is now left with more time to entertain South Africans with his pilchards-influenced dishes and love for rural Limpopo.

Mboweni’s successor however continues the tradition of a litany of finance Minister’s, that all tap-dance to the same beat.

Enoch Godongwana after all is not new to the economic circles that make the economy function. He served in government before coupled with the responsibility of guiding the governing party’s economic policy.

Given the state of the economy and the lack of innovation in the last 20 years, it is not clear whether South Africans should be enthused. After all, having no expectation is probably the best way not to be disappointed.

QUESTIONS ABOUT SERIOUSNESS ON CORRUPTION

However, what these appointment’s do indicate is that politics is bereft from principle. If the president was really concerned about Mkhize’s alleged corruption racket, then Enoch Godongwana would not have even been considered, since a company that he and his wife founded, stood accused of robbing millions of pensioners from their monies.

Equally, Zizi Kodwa would not have been rewarded with the post as a deputy minister in the Presidency responsible for State Security. While Lindiwe Sisulu’s move to Tourism can be seen as a demotion, the fact that she is still a minister is once more an indication that politics triumphs the principles of ethical and accountable governance.

President Ramaphosa is playing the long-game and is proving himself to be a tactful politician – concerned about balancing his deck to ensure he survives politically at the next conference of the ANC in about a year’s time. Whether this serves South Africans in any meaningful way, is left for you to decide.